It’s time to board the plane., don’t forget your spirit dolls

You cross your fingers, hoping you’re not going to be seated next to a child.

But this is no ordinary kid.

Sounds too bizarre to be true?

Not if you’re boarding a flight in Thailand.

The lifelike dolls have become so popular that regional carrier Thai Smile Airways. A subsidiary of Thailand’s flag carrier Thai Airways recently instructed its staff to allow passengers to purchase a seat for their Luk Thep dolls.

Luk Thep are believed to possess a child’s spirit and bring good fortune, thus many Thais have taken to treating them like real kids.

The internal Thai Smile memo, being circulated among Thai media. Says the dolls have to be buckled up like human passengers and will be served snacks and drinks.

As with real children, they’re barred from sitting in exit rows.

Don’t have a ticket for your doll?

It’ll be treated as carry-on luggage and stowed during takeoff and landing.

Thailand’s Department of Civil Aviation (DCA) has taken notice of the issue. And is now reportedly discussing the matter with local aviation agencies and airlines to formulate a policy that complies with security regulations.

CNN approached several other Thai airlines for comment on the issue.

“We treat the dolls like any other dolls,” said Patee Sarasin, CEO of low-cost airline Nok Air.

“The customers can put the dolls on their lap while flying. If they want to buy a seat, it is the most expensive price possible. Therefore, we do not encourage customers to buy seats for the dolls, but we cannot stop them from buying another seat if they wish to do so.”

AirAsia, meanwhile, said it has no policy in place regarding Luk Thep dolls. 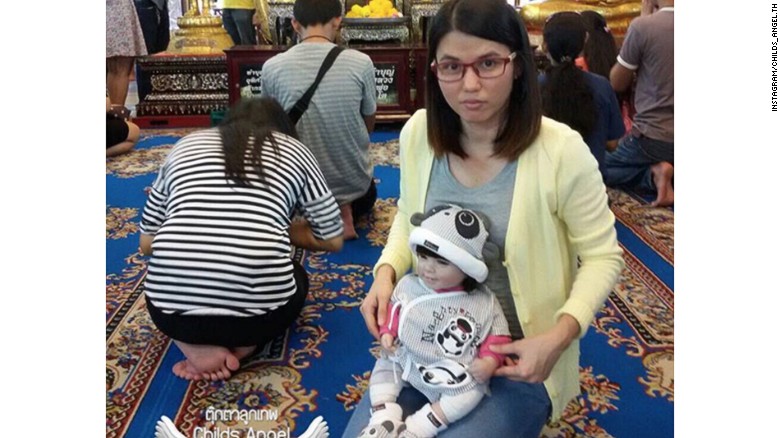 A Luk Thep doll is treated as a real child by its adopted “parent” and can cost as much as $362.

Turns out the DCA’s security fears may have some merit.

On Tuesday morning, police at Chiang Mai Airport reportedly intercepted a Luk Thep inside a black suitcase that was being used as a drug mule.

Underneath that sweet exterior police say they found 200 tablets of yaba — a methamphetamine-based drug produced in Thailand.

Why do people believe the dolls are possessed by a child’s spirit?

Though many of the Luk Thep are imported, they reportedly go through a ritual in Thailand that involves implanting them with a child’s soul.

They became popular when local celebrities started posting on social media about the impact the dolls have had on their lives.

Today, owners frequently share photos of winning lottery tickets. Attributing their luck to the dolls, which range in size from 10 to 22 inches in height.